Turning the Struggles & Stereotypes inside out on Dyslexia 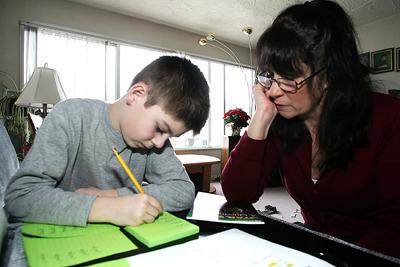 Brody Bonfield works with Dyslexia Victoria Online’s Karey Hope as he overcomes the learning challenges that plagued his early years.


Genevieve Van Bebber is a 31-year-old business manager with a head for numbers.

She handles accounting for a California-based business now, but she and her mom vividly remember a time when math was not her strong suit.

“I was having a really hard time getting Genevieve to understand what a fraction was,” mom Karey Hope remembers.

The concept on paper was incomprehensible for the Grade 3 student, and her mom was becoming increasingly frustrated — until she found a way to turn an abstract concept into something tangible.

“We had a bowl of fruit on the table, and I grabbed an orange and put it in front of her,” said Hope. “We were talking about wholes and halves and quarters, and I said, ‘What is this?"

All of a sudden, something clicked in Genevieve’s mind.

“She said, ‘That’s a whole orange.’ I cut it in half, and the light bulb went on for her immediately, and she said, ‘Those are two halves.’”

Van Bebber remembers that night, too.

“It wasn’t that I couldn’t understand it — she just had to teach me a different way, and once she found out how my brain worked, it clicked,” said Van Bebber.

“That night,” added Hope, “we went very far with fractions and other math concepts she was learning in class — and this is typical. Once they get it, they fly.”

“They” are people with dyslexia.

Hope learned her daughter had dyslexia when Genevieve was beginning grade school in the early ‘90s. At the time, there was little in the way of resources to help dyslexic children, and Hope took on after-school tutoring duties to ensure her daughter was not left behind.

“I started coming up with ideas and plans from my own research, and what ended up happening was we started to see success.”

Interest in Hope’s techniques has spread to the point she’s created her own Cowichan-based business with partner Howie deGraaf, Dyslexia Victoria Online, and has been invited to host workshops as far away as New Zealand and the United Kingdom.

For Hope, the first step to understanding dyslexia — commonly connected with the reversal of letters when spelling — is understanding what it is not.

“It’s a learning difference, not a learning disability,” she explained. “We look at it as being right-brained versus left-brained. It’s just a different way of perceiving things.”

And in manifests itself in countless ways.

“It’s not just spelling and reading and math. It’s a whole thinking style,” Hope said. “It’s how you approach everything, how you communicate.”

And in many ways, it’s a gift.

“Unfortunately being able to spell and read is equated with intelligence, and this is one of the biggest fallacies,” says Hope. “But dyslexics tend to be very intelligent, above the average.”

The abstract may be difficult for a dyslexic to understand, Hope says, but that same dyslexic can grasp a real-world situation with a three-dimensional, 360-degree view.

“We need to see the forest before the trees, and once we do, then we move to the parts,” she said.

This means a sequential school system can present difficulties for a dyslexic learner.

“They start to teach a subject from step to step to step, going toward a conclusion, but a right-brained learner, who is thinking of the whole picture, doesn’t understand that.”

It’s not uncommon, Hope pointed out, for a dyslexic to read the end of a book first, just to understand where he or she is going.

These differences in learning styles, meanwhile, mean dyslexic children may be regarded as lazy, slow or even stupid. And that continual loss in confidence can lead to real problems.

“One of the sad things about dyslexia is that it’s not a disability, but unfortunately for some individuals it can become one if it’s not tended to.”

Working with dyslexic learners has become Hope’s life work. She helps children work past difficulties that can crop up, and breaks down blocks for adult learners who have long since given up.

“We have to get them past the idea that they’re stupid first,” Hope said of both child and adult learners.

Hope and deGraaf also host public workshops and work with teachers to ensure all children — dyslexic or not — get the most out of their educations.

That’s been the case for Brody Bonfield, a local Grade 4 student who’s worked with Hope.

“He was doing very poorly in school,” admitted his grandmother, Maureen McKenzie.

“But they (Hope and deGraaf) did an assessment and told me he’s a kinetic learner, which means he likes to move while he’s learning.”

The method, also called tactile learning, means the learner benefits from a hands-on approach to education — and it’s worked for Bonfield, McKenzie added.

“Everyone, dyslexic or not, has a dominant learning style,” Hope explained. “Some are kinetic, others are visual or auditory.”

But, she added, none are wrong.

The important point for Hope is that a child is learning, whether it’s on paper or with a piece of fruit.

Decoding what the symbol of the letter is, what the sound is, and then blending that sound into a word.

“What happens for a dyslexic, right-brain learner is the part of the brain that normally does that type of processing does not activate,” she explained. “It’s actually on the right side, an area used for recognizing faces, so it works in images.”

By the time a dyslexic child reaches the teenage years, Hope added, this issue usually disappears.