Dysgraphia is a common problem for people who have Primary Dyslexia (inherited Dyslexia).

Dysgraphia should be considered when assessing a child or adult for Dyslexia.

Writing difficulties can make other issues of Dyslexia even more frustrating and slow their ability to write their thoughts down in a legible and organized manor. Dysgraphia should be addressed and accommodated in a teaching plan for a Dyslexic student. 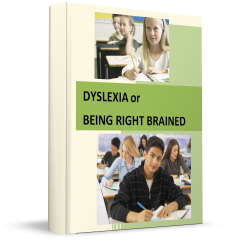 Our book "Dyslexia or Being Right-brained" goes in depth about Dysgraphia and methods to improve a student's handwriting.
Click here to order.

People with dysgraphia usually have problems writing on some level, and often lack other fine motor skills, finding tasks such as tying shoes difficult. It often does not affect all fine motor skills.

They can also lack basic spelling skills (for example, having difficulties with the letters p, q, b, and d), and often will write the wrong word when trying to formulate thoughts (on paper).

In childhood, the disorder generally emerges when the child is first introduced to writing. The child may make inappropriately sized and spaced letters, or write wrong or misspelled words despite thorough instruction.

Children with the disorder may have other learning disabilities, but they usually have no social or other academic problems.’

3. Generally illegible writing (despite appropriate time and attention given the task).

4. Inconsistencies : mixtures of print and cursive, upper and lower case, or irregular sizes, shapes, or slant of letters.

6. Inconsistent position on page with respect to lines and margins and inconsistent spaces between words and letters.

7. Cramped or unusual grip, especially holding the writing instrument very close to the paper, or holding thumb over two fingers and writing from the wrist.

8. Talking to self while writing, or carefully watching the hand that is writing.

9. Slow or labored copying or writing - even if it is neat and legible.